After the intensive development period of IDR’s first releases, the 5.4 series of OMERO was intended to be a stable platform for the community and the OME team to build on. From its first release in October 2017 to its tenth and final release this year, 5.4 has, we think, served as a reference point for the community.

In trying to maintain that stability, however, it’s become ever more clear that we need the ability to quickly release individual parts of OMERO to the community. Fixes to file formats, performance improvements, security patches, and more should not need to wait on the simultaneous release of the entire OMERO platform.

Enabling such releases has been the focus of the upcoming, largely developer-centric release. Though with production-quality Docker deployments and the fresh-off-the-presses Bio-Formats 6.1, we hope that OMERO 5.5 will provide something for everyone.

During the development of OMERO 5.5, all 800,000+ lines of Java and Matlab code were migrated out of the openmicroscopy/openmicroscopy GitHub repository into individual repositories, each with a new Gradle build system. Support for Java 7, Python 2.6 and Ice 3.5 were dropped. Java 11 support was added. The versions of most of these new repositories began at 5.5.0, but they have already begun to diverge following semver principles. Though initially disruptive, we hope this modernization and modularization will ease participation in the development of OMERO. See the Gradle super project omero-build for more details. 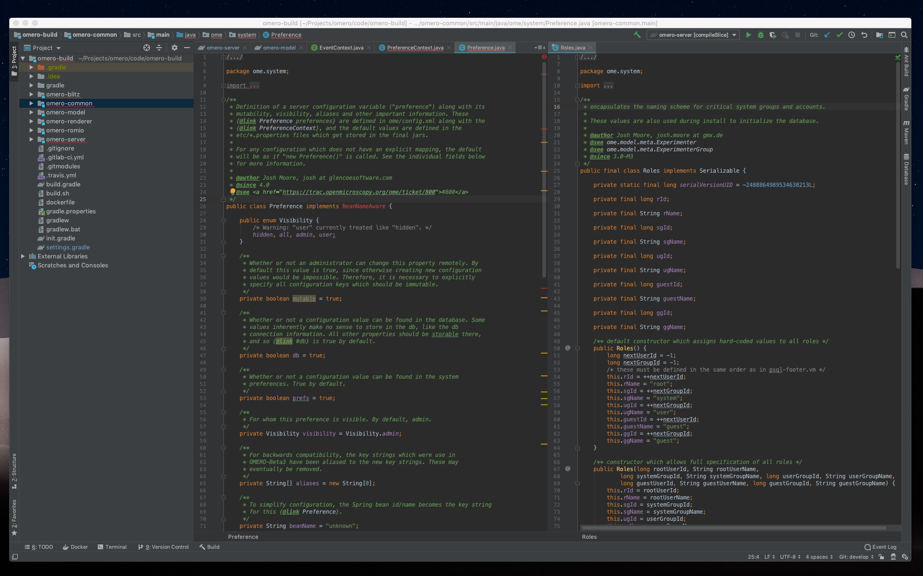 Beyond the changes for building OMERO, the distribution of OMERO.server and OMERO.web as Docker images is now considered production quality. Examples for using these images in various configurations are available under omero-deployment-examples. Both images will be updated with every OMERO release, and will also be updated with releases of the embedded components and plugins as necessary.

Other Docker images from the OME team that you may have used over the years have been deprecated and will soon be removed. A next step will be to additionally provide Helm Charts for easing deployment on Kubernetes. If you are interested please get in touch through the forum.

But don’t worry: we also didn’t forget our users. OMERO 5.5 finally makes the jump to Bio-Formats 6 both with its support for pyramidal TIFFs (see post) and for new community file formats like BDV, see Bio-Formats 6.1 announcement for more details. Moving forward, we look forward to helping you to create and share these more scalable file-formats.

In the coming months, we will continue to release fixes for the individual components of OMERO and hope to ease their introduction into your local installation. Feedback on how you find working with the decoupled repositories and installing changes would be much appreciated.

At the same time, we will begin preparing for the next large changes:

P.S. In case you missed it, the OME forums have been migrated to image.sc